Great design and layout. Still wondering about the drive and long term vibration issue, especially on the thinner drives. The standard drives though are in there pretty solid. Fan was great - at LOW was very quiet and then at high still not overly loud. Would be drowned out by most other components. At low speed though, I couldn't really detect any air being drawn in the front. At high speed I could feel a bit. Really sharp looking cage. Asus LSI Logic SAS x28 Expander

Solid black design, nice satin finish and the blue on the front, really pops. Tested with standard screws used for CD-ROMs, can be used to secure this cage - Does not include any SATA cables - Standard 80mm fan and standard connectors for both two pin and three pin fans, very nice. Some anti vibration material also applied. 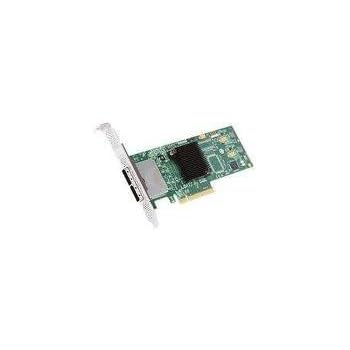 I believe the trays though are compatible with various models - Only two cut outs in the rear PCB, but almost full width, so cooling should be ok. As per the pic, the way the connectors are wired in series on most PSU's can make it a bit tight depending on which plug you are using. The cabling on the SATA power connector is pretty tight. When you pull Asus LSI Logic SAS x28 Expander the drive tray, you then have to remove this plastic spacer unit that is installed.

They have to have that as the rails are a bit flimsy. Put the drive in, they provide 3 holes per rail that all line up. Bit of a balancing act to get the drives screwed in. Good snug fit.

LED as observed: Has a three year warranty, which is a nice plus, they expect the cage to last as long as your hard drive. Fan cable came tied down with a twist tie to the edge, bit of rudimentary cable management.

Can't say enough about the fan solution now, brilliant. No fan speed controller, but the included 80mm one isn't too noisy at all, and you can feel the air being pulled in front the front. Very easy to swap in a quieter fan if that is your thing or something with more draw. Another solid case Asus LSI Logic SAS x28 Expander looks good installed. Minor issue with layout in the rear though.

CoolerMaster STB-3T4-E3 4x3 - Packaging is fine, should arrive without any damage - Very lightweight - No backplane nor hot swap support, all drives directly screwed into the cage - Excellent cooling, from a standard sized, front mounted mm fan Asus LSI Logic SAS x28 Expander Just getting started? Excellent value for the money and great cooling potential. A bit tedious removing the whole thing every time you want to work on a drive, but, still excellent option.

Remember to mark down all your connections so everything is hooked up properly when you re-install it. Much easier to use.