Being a first-person shooter addict, I would not normally recommend a gamepad to anyone, finding them generally a cumbersome and unresponsive way of doing things compared to a mouse. I found that mouse control in Crimson Skies to be near unworkable however, and spotting one of these things second hand in a junk shop, snapped it up.

So on to what you get on this gamepad, brazenly ripped from Gravis' website as it seems accurate enough: The standard 8-direction digital D-pad the larger of the two directional pads is ideal for quick directional changes in arcade and sports games. Proportional D-pad. The proportional D-pad allows smooth directional movement for games that require more accurate directional control the kind of control usually available only with a joystick. Digital Buttons.

In games that support these functions, these buttons do the obvious; otherwise, you can use the software to assign keyboard commands to them. Proportional Flippers. The two large, index finger-activated flippers at the top of the pad are proportional. Games may support these proportional flippers in a number of ways.

For instance, in a flight or driving simulation, the flippers are typically used for proportional rudder or throttle control. The flippers can also be assigned to send keystroke commands to games that do not support additional axis-type controls. HotSet Switch Button. Use the Hotset switch to switch temporarily to a second Gameset. This allows the buttons to perform two separate sets of button functions.

If you prefer, you can use Gravis Xperience to assign a different function to the HotSet switch button, and you can set any button on the game pad to function as the HotSet switch. Proportional Throttle Slider.

The 8-way point-of-view switch is a third directional control, typically used to change cockpit views in flying or driving games. In other games, it may be used to twist the torso of a game character or as an additional control for strafing motions.

Setting it up Unlike some modern gamepads I've spotted, this one still uses a midi port rather than a USB slot. The part that plugs into the midi has a pass-through affair on it so you can chain other devices on there, but to be honest it sticks out quite far and I would be very concerned about attaching another device on there, given the weight it would put on the back of your soundcard. Windows wasn't able to see the Gamepad plug-and-play style until Advanced Gravis Gravis Xterminator Digital GamePad Gravis software was installed on the machine. Here you see it with both the D pads pressed down: Most of the time this will be enough to let you run games. Crimson skies seemed happy enough with the default settings, but you may want to play around with things a bit. To do this you need to go into the Gravis Xperience software. 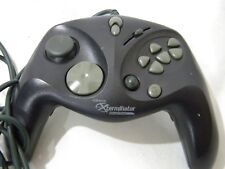 You get a large Advanced Gravis Gravis Xterminator Digital GamePad control panel on your screen with all kinds of features which can be enabled by pressing odd buttons. Have a look: It takes a bit of getting used to, but after 10 minutes of playing round with the settings I was fairly comfortable with it. You can set the proportional pad up to emulate a joystick or even a mouse if the game doesn't seem to like talking to what it rightly thinks is a gamepad. Settings can be saved so you can load a particular set for a game, although I couldn't find any really quick way of switching between multiple sets other than the Hotset function.

In use First the bad news. I couldn't find any games that wanted to work with the Digital D-pad s opposed to the P padhaving tried all sorts of settings.

It all seems to be set up okay, and it detects fine in the normal windows control panel. Both these games worked fine however with the proprtional pad, although proportional is slightly too slow IMO for a beat'em'up. 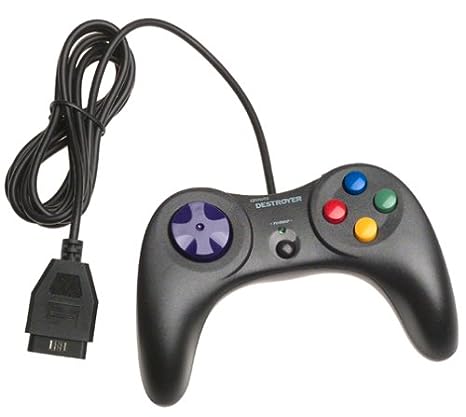